One of the strangest and most prevalent myths of our times is the myth of ‘the individual’. It is so prevalent, in fact, that it isn’t often questioned: we are all individuals… aren’t we? It is an integral part of our development to identify as ‘I’ (according to Western psychologists). Perhaps it is actually just a developmental phase – perhaps we have been culturally stunted here because isolation is particularly good for the economy… but wait. I’m getting ahead of myself. You probably know the story of The Little Red Hen. You know, that iconic story that libertarian Ayn Rand fans love to tell you in the middle of the night when you’re drunk in their kitchen and have nowhere to escape to – because it proves that human beings are selfish and that poor people are just making bad choices? You know, that chicken who wants to make some bread and asks for help at every stage, but all the other animals in the animal farm are too busy being hedonistic assholes, so when her bread is finally made and they all smell the delicious yeasty scent… and come scrounging… and she’s like: “nah ah”. Well, I’m sorry to tell you this, but that never happened. You know why? Chickens are communal animals. They hang out in groups and scratch for bugs together – sure they fight over food, especially when there’s scarcity, but being together is something they do. It’s good for their survival, and it’s company. If chickens were going to bake bread, you can bet your arse they’d do it together.

Human beings are social animals – probably even more so than chickens. We always live in communities. We are never completely individuals. We all depend on each other. It is a bit ridiculous to think of ourselves as independent individuals – when we are all so obviously and completely inter-dependent. It’s a bit like treating a cell in your body as an individual – or taking anything and isolating it from its environment and then trying to understand that thing. It doesn’t work. Individuals can only exist in relation to social and environmental contexts. We cannot be removed.

The funny thing is that people are so embedded in their culture they really can’t see out of it – it’s the water in our goldfish bowl, right? So the way we thing – well it’s just normal – IT’S JUST THE WAY THINGS ARE: OKAY? It’s hard for us to even imagine a society without ‘individuals’… but actually, our mythology is not universal. There are lots and lots of cultures where ‘the individual’ is not really all that important. This is a bit hard to understand from a Western perspective because our philosophical history is based on the idea of ‘the individual’. Our morality starts with ‘me’ and extends out – hopefully – to other people, sometimes it stretches to other animals, but rarely does it encompass the ecosystem (which is probably why the ecosystem makes a better starting point). The anthropologist David Graeber, points out:

Western social theory is founded on certain everyday common sense, one that assumes that the most important thing about people is that they are all unique individuals. Theory therefore also tends to start with individuals and tries to understand how they form relations with one another (society)… With no concept of either “society” or unique individuals, [the Melpa] assumed the relationships came first. (Towards an Anthropology of Value, 2001, page 36, 37)

The thing about assuming that we’re all just selfish is that it ignores that we’re equally not. Sure, it makes a great economic platform if you like to promote the kind of economy that destroy ecosystems and exploits people as much and as quickly as possible, and it fits with the Christian heritage of Western culture that assumes we’re all sinners, but it ignores the blindingly obvious communal aspects of us – as a species. Basically, if someone was like: ‘dude, when you’ve got a minute, can you help me grind this flour so we can have some sweet gluten-free fairtrade bread in five hours’ and you had the time and energy, and that person wasn’t a talking chicken, you’d probably be all over that, right? You’re a decent kind of person… and people have been making bread communally for thousands of years. 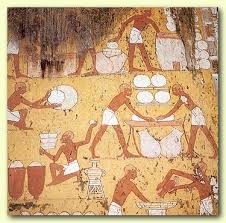 Anyway, there’s another reason The Little Red Hen is a terrible story: it sucks to eat alone. If I went to all that trouble to make some kick-arse bread I would want to share it, and the recipe.