Skip to content
Are you wondering why your love life isn’t quite what it’s supposed to be? Why doesn’t your partner bring you roses, arrange surprise weekends away and find all your flaws lovable? Why doesn’t that hot guy or girl you have a crush on accidentally find your phone/wallet/umbrella, track you down then ask you out for a coffee at that cute cafe you’ve been wanting to go to? Why doesn’t the person you’re seeing reply to your texts straight away and always know the exact right thing to say to make you feel good about yourself? Well, my dear, it seems you are stuck in a romance narrative trap. A what?  Well, narratives are the stories we tell ourselves about our lives: our values, our pasts, our future ambitions, our identities.  Romance narratives are those that get all gooey and, well, romantic, like when you start to turn that girl/guy you’ve been hooking up with into a possible modern-day-fairy tale before you’ve even discussed politics with them.  Before you get all slushy and defend romance, just realise I’m not attacking all romance, just the romance narratives that are traps…

Whether you’ve been in a long term relationship that doesn’t quite measure up to rom/com standards or you meet someone who gives you butterflies, your brain chemistry goes out of control and all of a sudden you’re a love-zombie, checking your phone every other minute and day-dreaming about your shared future together, you’re in trouble.  Does this sound familiar?  Some people don’t seem to fall into the trap and some fall into the trap so well because it suits them so much that it isn’t even a trap, but I have been falling in and out of this trap for a long time and in the past few years I have been trying to figure out how to avoid it.  Part of the problem with avoiding it is that all those brain chemicals are highly addictive and neptunian-delusional. The other part of the problem is that the romance narrative is just so fucking pervasive. They read ya Cinderella… …you hoped it would come true, and one day your prince charming would come rescue you… Anyone remember that song from the 90s? It’s what I think of when I think of romance narrative examples – and IT’S A TRAP! Well, maybe not always, or maybe some traps are quite nice, but we’ve all grown up with unrealistic and unhealthy, bland and thoroughly hetero-normative narratives around romance – Disney is the easiest to blame, but really, it’s everywhere. Hey look, it’s a… 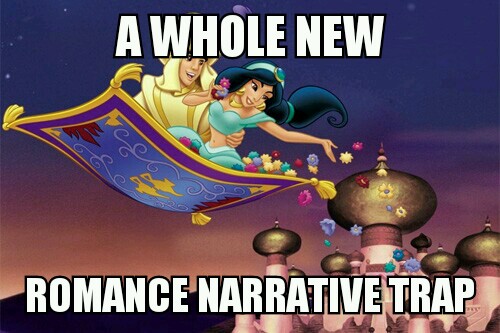 What’s wrong with Aladdin?  Let’s not go into the insidious racism and sexism, let’s stick to the romance issue here.  So there’s this princess right, and she’s been sheltered and protected all her life and dresses like the genie in I Dream of Genie – and she’s just waiting for her hero, who is this nice, poor kid, with cool monkey who is very fit from running away from the police but, overall, a character with a good alignment (chaotic). You know how the story goes, even if you haven’t seen the movie, because it’s how all these stories go – there’s a bad guy, the hero saves the day with the princess helping out as his sidekick and they sail off into the sunset on their magic carpet: happily ever after. This is what is supposed to happen, right?  You’re supposed to meet someone, go through a few trials and tribulations, and then after the plot climax everything’s peachy. I was raised not to believe in happily-ever-afters but my cynicism hasn’t saved me – if anything, it’s only made things worse, putting me at cross-purposes with my brain chemistry addiction.

So what brain chemicals are involved?  Dopamine: the reward pathway also associated with substances like cocaine and heroin. Dopamine is also known to affect your serotonin levels which can bring on low moods and further the motivation for more dopamine.  So when you don’t get the response you want, or you haven’t had any positive attention for a while the withdrawals kick in… love zombie attack! Yuck. If you’re wondering if he/she is your soul-mate, watching rom/coms imagining yourself and x as the leading characters, altering your appearance in accordance with what x might like… you’re in serious trouble.  Brain chemistry isn’t the only way of looking at this thing… there is all that aforementioned unhealthy-social-programming to deconstruct, “bad” habits to break out of and psychological issues to consider like insecure attachment. Is it always a trap? Yes and no. I have come to realise everything is a trap. Some traps are nice, some traps are comfortable, some traps help you feel like you’ve achieved something… saying everything is a trap detracts from the meaningfulness of the word ‘trap’, so we’ll just say it’s a trap when it’s dysfunctional. How does that sound? Is your romance narrative causing you grievous emotional harm? Are you wasting energy waiting for a text of continuously hassling your partner to be more romantic? Are you moping because there’s no one who loves you in ‘that’ way? Well, there you go… TRAP!

But what if x is my soulmate? If you believe in soul-mates and that reincarnation shiz then take into consideration that a soulmate isn’t someone to give you happily-ever-afters, it’s someone who is here to give you major karmic lessons: lots and lots of pain and suffering, until you figure out how to learn from it and get out of the trap. The more you worry about whether it’s ‘meant to be’, the worse you are making it.  Focus on learning your lessons rather than controlling uncontrollable variables. If something is meant to be it’s not worth worrying about, anyway, is it? It will just happen, whether you like it or not. Don’t get your free-will tied up in your determinism, it’s not sexy. Okay, I’m in the trap, what can I do? I don’t have all the answers, but I have read too many self-help books, so here’s some helpful advice: 1. Get some perspective Step back from the drama of the romance, to stop sinking my energy into crazy fantasies. Don’t turn into a psi-vamp, you’re too good for that, and after a while your friends will stop wanting to hear about x and how awesome or horrible they are. Maybe x is your soulmate, but that’s neither here nor there. In your present life you have other more important shit you could be doing. Do it. 2. Bring it back. Bring your focus and your energy back to you.  You have been leaching it all over the place and it’s making a mess on the carpet.  I have this mantra which also resembles this 90s song, which ironically has extremely love zombie lyrics if you read the rest of it. Play this song and try to dance like in the music video. Go on. 3. Balance.  Balance everything – food, sleep, exercise, entertainment, meditation… be calm. 4. Get fulfilling creative interests.  There’s nothing better than fulfilling creative interests. Do something, make something, build on something. This will get your dopamine pathway functioning more healthily because you are being awesome and getting rewarded for it. 5. Meet ownemotional needs. Easier said than done, but you really are the most qualified person for the job. Be sensitive to your own feelings and figure out what needs aren’t being met – then find more awesome ways to meet those needs. 6. Stop talking about x all the time,  Just stop it. stop thinking about it so much, think about cats, cats are nice.